For accurate and precise research

The risks to human health are increasingly spoken as a result of radiation from the natural radiation background.

Much of this exposure is due to radon and its daughter radionuclides. The natural radioactive element radon (radon-222) has the largest contribution to the internal radiation of the Earth's population. According to the 2008 report of the Scientific Committee for the Study of Atomic Radiation at the UN, 41% of the population's exposure is due to the inhalation of radon and its short-lived subsidiary products contained in the atmospheric air.

Radon is classified by the World Health Organization as a human carcinogen. Radon radiation results in an increased risk of developing lung cancer. The individual risk for lung cancer is mainly dependent on three factors: radon concentration; duration of irradiation; characteristics of the individual; smoking. It is important to bear in mind that not every radiation of radon poses a risk to human health.The consideration of their combined effect, assessing the risk factors for lung cancer development, is essential. As with other radiation-induced tumors, there is a latency period between the impact and manifestation of cancer. The most likely latency period is about 20 to 30 years. A possible shorter latency period is associated with older age at onset of exposure, smoking and higher levels of irradiation.

Under normal conditions, radon is a gas without color, smell and taste. Radon is the heaviest noble gas and is chemically inert. It was discovered in 1898 by the French chemist Friedrich Dorn.

It occurs naturally to varying degrees in all rocks and soils. It is present everywhere in the atmosphere, but due to the dilution of atmospheric processes, radon concentrations in the open air are generally relatively low. The temperature changes during the different seasons. The wind speed and the atmospheric pressure have a strong influence on its concentration in the air.

In enclosed spaces, mines, caves and homes, radon levels can be quite high. The sources of radon in the buildings are: the geological composition of the soil on which the home is built, the building materials used and water. The main mechanism of radon penetration is the movement of a stream of soil gas through cracks at the base, walls, sewers, communication pipes and others, caused by the pressure difference outside and inside the building. In addition to the pressure difference, other factors such as relative humidity and soil humidity, the type of the building and the ventilation in it affect other radon movement. For example, if room air exchange is very limited, even normal emissions of radon may result in its accumulation in the air of these premises. Usually, radon levels are higher in basements, cellars and ground floors that are in contact with the soil.

The radon is soluble in water. Therefore, it is present in groundwater that passes through soils and rocks with a high content of uranium and radium. When using water rich in radon for drinking purposes, the radon is released into the air while water is running. Surface waters usually contain 222Rn at very low concentrations. We can find increased concentrations of 222Rn have in underground waters. The contribution of 222Rn of potable water to the total concentration of 222Rn in buildings is not constant as long as radon can be released only while water is drained through taps or showers. For this reason, radon released from water is rarely the predominant source of high indoor concentrations, although high concentrations can be recorded in the short term.

Depending on a number of factors, the concentration of radon in the premises varies with the time of the year, day by day, and hour by hour. Different concentrations of radon can be established in two neighboring houses. Measurement is therefore the only reliable way to determine radon levels in a building. 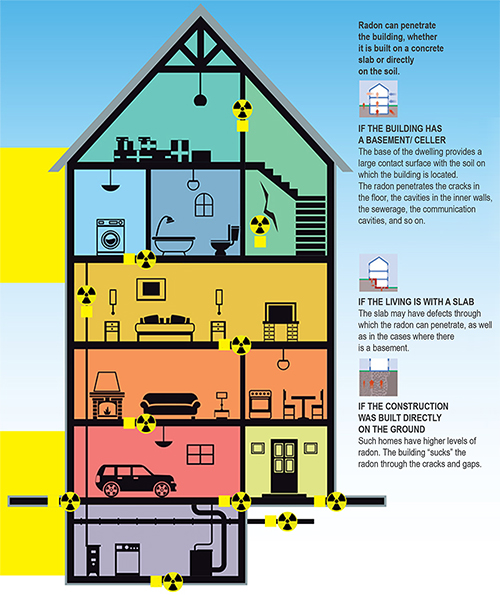 Like other inert gases, radon is inhaled and exhaled without significant interaction with the body. Although 222Rn is an α-radiant, the biological hazard is associated with its short-lived decay products - 218Po, 214Pb and (214Bi + 214Po). Radon daughter products are chemically active, they form ions that are easily attached to the aerosols in the air, participate in the movement of the aerosol as a component and inhalte into the human body. In the body, it is irradiated internally, mainly by the bronchial epithelium, as the part of it, that goes to the trachea and oral cavity, is taken quicker through the digestive tract. 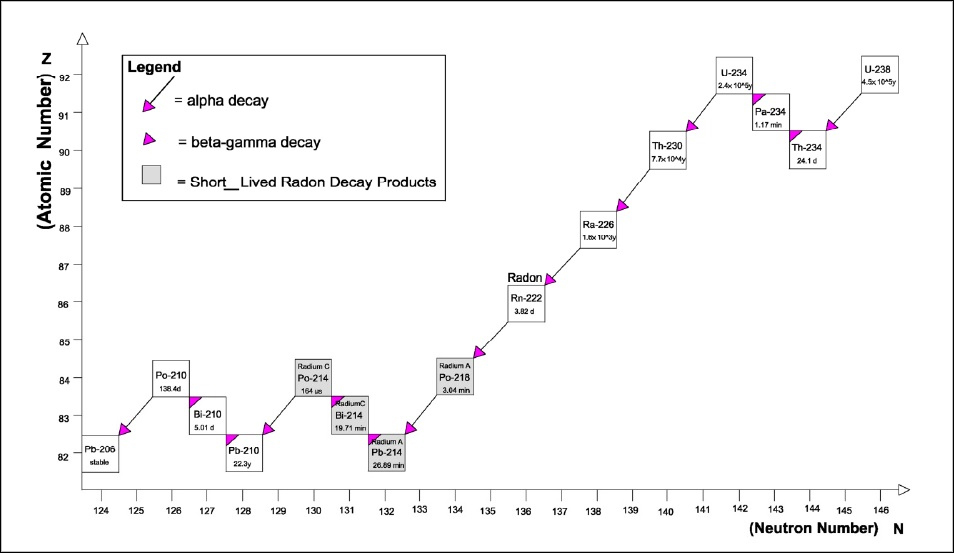 How do we protect ourselves from this radiation?

Some of the measures are simple, such as frequent ventilation, but this does not produce long lasting results. Filling of holes and cracks on the floor and applying an insulating layer is also associated with a certain reduction in radon concentrations. However, the best and long term results are achieved by installing the so-called "Antiradon shaft" under the foundations of the building.

This is a very popular way for managing tis problem worldwide. In Bulgaria the first radon shaft was built in 2008 under the leadership of Assoc. Prof. Dr. Dobromir Presianov from the Faculty of Physics of the Sofia University (worked at DIAL as a physicist from 1986 to 1991).

To reduce the intake of radon at the expense of exhalation from building materials, different isolation techniques can be used. For example, in Sweden, the walls of houses made of lightweight concrete with the addition of clay shale (where the concentration of radium-226 is very high) were covered with aluminum foil. Plastics products (polymer paints and wallpaper) are much more widely used, and it is particularly important that there are no cracks in them.

Recently, DIAL Ltd. together with the NCRRP completed a project for drawing up a radon map of Bulgaria. This project aims both to identify areas with high concentrations of radon in buildings and to inform the public about ways of securing buildings and reducing the health risk caused by this factor.